More Fluff - does what it says on the tin.

This is a mod for Dicey Dungeons, which adds 1000+ new and "exciting" items. It injects these into the default episodes, so all you need to do is install the mod and play the game normally!

From the unassuming Paintbrush, to the mathematical Primal Punch; survival-heavy Regen or the risky Really Spiky  Shield; the pun-worthy Pee Shooter or Gooplicate... there'll be an item for you!

Unzip the archive and place the morefluff folder in your mods folder - Dicey Dungeons/mods. Open the game, go to the Editor, and enable the mod.

To make a shortcut for this mod, create a batch file which runs diceydungeons.exe with the parameter mod=morefluff.

Edit:  Okay, occasionally one or two new spells show up (Magic Firewall) but I'm not seeing very many, much less 1000+.

Hello I hope you're well!

Hey I hope you're well! Still love this set!

also i accidentally set the mod path off of the base one, how do i set it back? i have no clue what it is

i might just be doing a dumb idiot, but i have no clue how to load the mod

Hi! Love this mod so much, though I did encounter a bug that crashes the game when using Revolver- I got to 6 Ammunition and it completely froze up. Some more info, if it helps:

Thief Bonus Round, equipment was Wrecking Ball, Blade of Joat, Revolver, Lockpick, and I think Inflation? Fighting against Vacuum.  Current bonus rules were Snowman (1 freeze every turn) and Sneezy (reroll a dice every time you use an item).  My best guess would be it had something to do with the Sneezy rule?

Not sure if I'm doing something wrong here, but I have "Icicle Fall +" and it doesn't freeze enemy dice.

Yeah, that's a known bug, sorry - will be fixed in a future update! (Hoping to get one out soonish)

I just encountered a bug where when I go into bonus round, I don't get to pick starting equipment, meaning I'm stuck having no equipment

I thought it was a feature as I was playing as the Thief, but no, its everyone

That's a serious bug! Have you made sure you're updated to the latest version? I'm sure I fixed a bug like that a while ago.

I just downloaded the most recent 3.0.1 patch, and it was actually working on the older one from a while ago. In all honesty, its fun and hard to beat bonus round as thief with only stolen equipment to start. 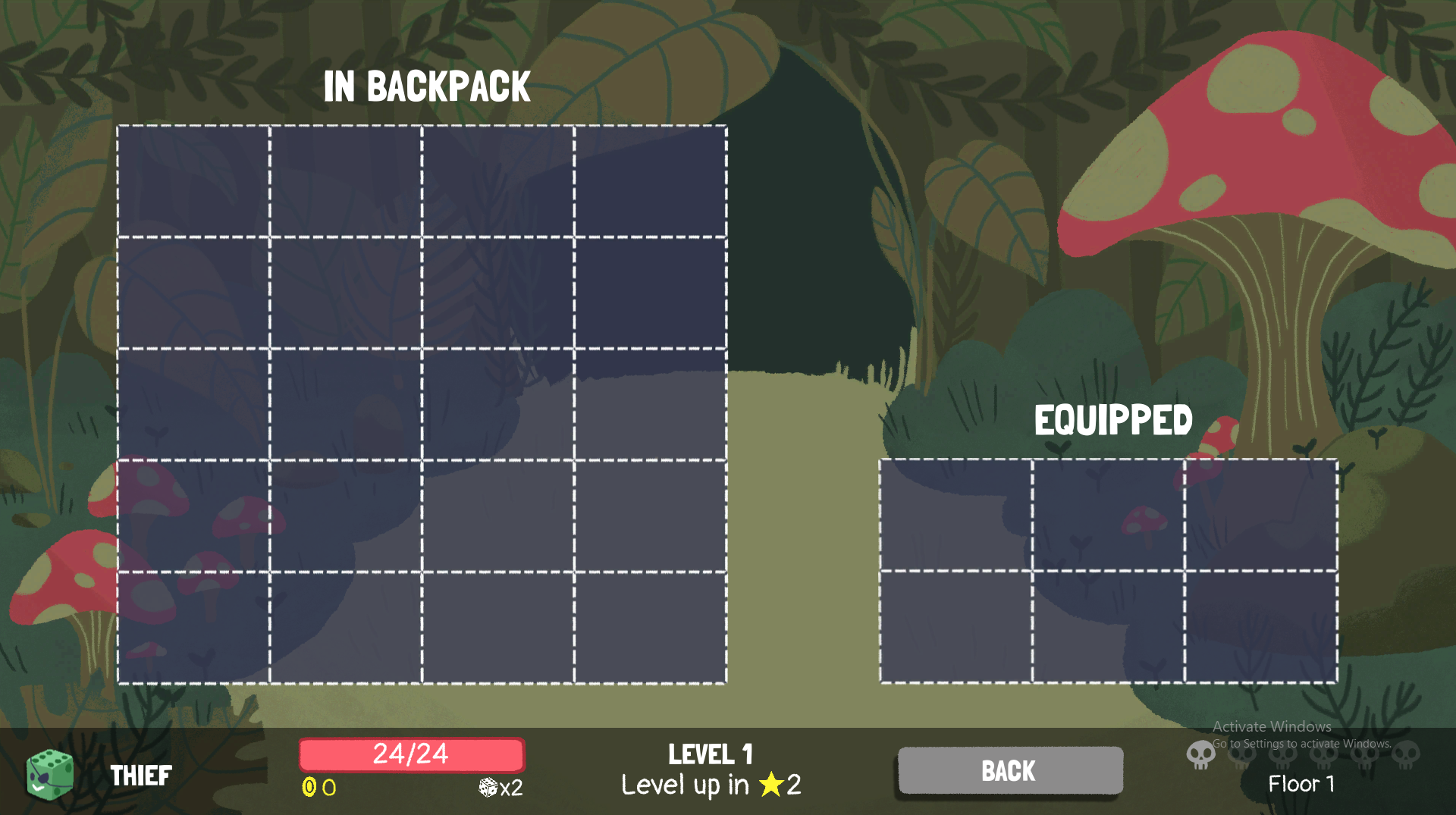 Just encountered a bug while running only this mod. Fighting Loud Bird on a Bonus Round with alternate status effects.

Very strange! What equipment did you have? And what were the other rules?

I was playing a Thief with lots of countdown equipment:

- grandfather clock (i think) - deal 10, counts down at start of turn

I think those were what I had. Other rules were:

- enemies turn into a bear after 4 turns

I tried the combat again, and had no such problem. Would you think it's a base game bug perhaps?

Also, incredible mod! Such a labor of love <3

Thanks! That's a lot of useful information - I'll see if I can reproduce this bug. Maybe it's a base game thing, who knows 🤷‍♀️

just kidding, this mod is awesome

how does base essence work?

I installed incorrectly and now I broke diceydungeons :(

I fixed it, though I'm am not going to mod for a while

Hey! Is this compatible with Mac?

It should be, yes!

Having some trouble with Resonator. Double Resonator+ crashes the game. Was also getting crashes with both Resonator and Solar Panel equipped.

Oh, that's a serious bug! I'll look into it, thanks for the report.

I love the new card packs for the jester. While playing the Robot, however, I've found that the game crashes whenever I play Lockdown.

Thanks for the bug report - this will be fixed in the next update, pretty soon!

Another bug I found: the robot item 'Superconductor' does not unlock during Autoroll or a natural Jackpot, making it completely unusable.

Another bug: The rising effect of Helium Balloons can be cancelled by looking at the enemy's equipment, which causes all dice to freeze in place and act like normal dice afterward.

Is there a place that I can go to , to see all items that are added.

How do I fix "missing meta" and "missing icon" warnings? I get these warnings when I try to load the mod despite the respective files being in the folder.

That's a weird one! I think that errors like this happen when you change the mod path. Try resetting it to Steam/Dicey Dungeons/Mods?

It didn't seem to do anything. However, the mod works if I select the morefluff folder itself but not if I select the Dicey Dungeons mod folder, so I can only run one mod at a time.

Your problem seem to be that you nested the file wrong.
Your path should be something like that: .../Dicey Dungeons/mods/morefluff/(all the other files of the mod)

Not: .../Dicey Dungeons/mods/morefluff/morefluff/(all the other files of the mod)

Now the general mod path should be : .../Dicey Dungeons/mods

Hello! This mod is phenomenal and I pretty much use it religiously when I play this game. I'm just reporting a bug with the Urumi item- the upgraded version doesn't reduce countdowns on odd-numbered dice like it's supposed to.

Oh, nice catch! It seems to be reducing countdowns on even dice instead, whoops. I'll have a fix out for that soon - thanks!

Oh, I didn't realize this was a mod. WHOOPS.

How exactly do I run this on Windows?

it fixed, but i am trying to run your mod with megaquest mod (wich is said to have compatibility with yours) and it says both of the mods are duplicated

No, Megaquest isn't updated to the latest version right now.

Zweihander unupgraded doesn't do double damage.  Expose weakness doesn't increase the damage numbers when you hit an enemy, but still boosts the damage.  And also, Zweihander plus midnight charm, especially if it's upgraded, is op.

Zweihander does do "double" damage - if you put two 6s into it, it deals 2x (6) damage. This is consistent with other doubles items - Sneeze, Lunasa, Skeleton Key, Memorise - they all take doubles but only refer to a single dice.

Well, it's confusing then, because the number on the card that says how much damage it's going to do counts up to twice the total of the dice you put in, so it makes you think if you put in 2 6s, you would deal 24 damage.

Fair enough; I'll change that for the next update (which is coming in a few minutes)

Great mod! just a bug i found, Origami+ only returns one dice, even when using it correctly.

Oh, good catch, thanks! Quick enough fix though - I'll add that to the list for a future patch (probably next week)

This is awesome! I can't wait for the Dicey dungeons modding community to ignite, and this'll keep me interested for a long time. As far as i played it i've enjoyed all the new items! Due to the amount it makes synergies a lot easier to get, while all of them feel unique! this has inspired me to begin modding dicey dungeons, i'll learn eventually and really, Great mod! But one thing is, did you add any items for the bear?

Can't wait to try this! thanks for your hard work!

Uh... any dates for the download link release? Or at least drop one for a older version of the game?

I'll get the download link ready as soon as I can - there's a lot of stuff that needs to be updated from previous versions.

No download link for now - working on updating this mod! 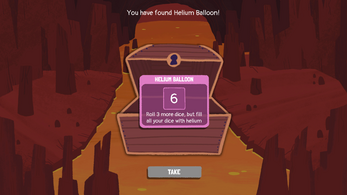 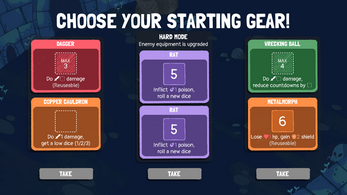 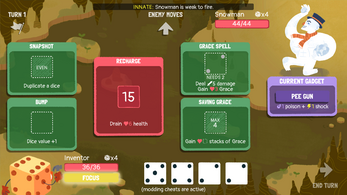